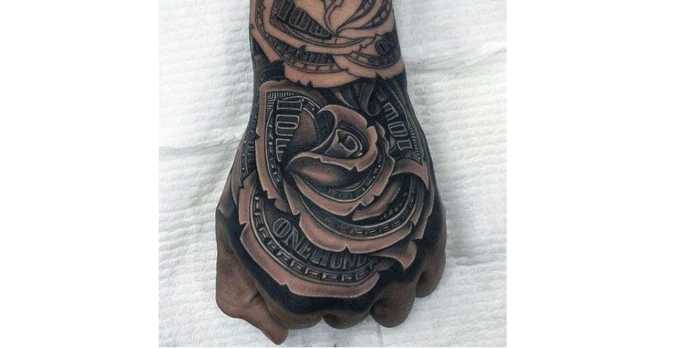 For long, rose tattoos were only considered feminine while men could get something as fierce as a wolf. It was hard for people to comprehend rose tattoos as masculine. These concepts faded over time as rose became more of a symbol rather than an association with women.

Irrespective of the size, rose tattoos for men are a more flexible choice for all body parts. This tattoo is a popular demand among many people because of its various complex meanings and the many ink colors available. You could also go for a tribal style to feel more connected to the unique version.

What Does A Rose Tattoo Symbolize?

As mentioned earlier, rose tattoos are available in a variety of colors, but the two popular options remain red and black. Both of them fall under the same group, but their interpretation changes with color.

The red rose symbolizes love, passion or desire, and romance. In history, this tattoo was mostly inked on the bodies of sailors. It acted as a reminder of peace and tranquility during their long and difficult journey. The red rose tattoo is often associated with religious themes, combining love and memory of a closed one.

The black rose, on the other hand, has a totally opposite meaning. Since the color black often represents grief and death, people get black rose tattoos in remembrance of someone who has passed away. The black rose also symbolizes strength and rebellion.

It’s hard to comprehend how potent rose tattoos can be. Powerful sailors and fearless soldiers have been getting it tattooed for long. Its meaning also varies with each civilization. The Romans believed it to be a symbol of bloodshed, while the Greeks considered it a symbol of immortal love. In Tarot cards, roses indicated a fresh beginning and optimism.

The rose tattoos come in various designs, which the wearers can easily relate to. You can use a combination of colors and get multiple roses tattooed on your skin, or go for a unique approach by combining it with other elements such as thorns and skulls.

There is no restriction on where should men get rose designs tattooed. But the preferable areas are the ones that get attention easily and stand out from other body parts as you’d want to show off the beautiful design.

One of the top searched and an eye-catching location for a rose tattoo is your hand. However, you must go to a professional and highly-skilled tattoo artist to get it done, as taking any risks on such a delicate body part is extremely dangerous.

The forearm and shoulders are another favorite placement for many people as the area is neither too small nor too large. This way, your designs may easily vary as the rose can be a dominating feature or part of a bigger concept.

Neck and chest tattoos are a bigger commitment, but nothing can really go wrong when it comes to the rose designs. Most people who prefer their rose tattoos on these areas have a more complex meaning behind the design they’d rather not reveal to everyone.

The Importance of Mental Health Why should you have an electric pressure washer?

© 2021. All rights reserved by lifespirefreedom.com